Evr lie in ur bed w/d nxt hundrd thngs u hav 2 do runing thru ur head? evr lost touch nd let a gud frndshp die coz u nevr hd a tym to call nd say hi? Wen u run so fast 2 get sumwer u mis half d fun of getting dr. Wen u worry nd hurry thru ur day, its lyk an unopend gift thrown away. Take tym 2 listn 2 d rain slappng on d ground or gaze at d sun in a fading sky. Life's nt a race. Do take it slower. Hear its song b4 its over..

The road to success is not straight. There is a curve called FAILURE. A loop called CONFUSION. Speed bumps called FRIENDS. Red lights called ENEMIES. Caution lights called FAMILY. You will have flats called JOBS. But if you have a spare called DETERMINATION, An engine called PERSEVERANCE, Insurance called FAITH, A driver called "GOD" You will make it to a place called SUCCESS!!!


8 Truths to remember
1.Faith is the ability to not panic.
2.If you worry, you didn't pray. If you pray, don't worry.
3.Do the math. Count your blessings.
4.God wants spiritual truths, not religious nuts.
5.Laugh everyday, it's like inner jogging.
6.Growing old is inevitable, growing up is optional.
7.Silence is often misinterpreted, but never misquoted.
8.There is no key to happiness, the door is always open!

"there's always a possibility that a person can get attracted to another. it's human nature. it's not wrong. but that's why you are in a COMMITMENT. you DISCIPLINE yourself. one may get attracted to numerous prospects and it's okay as long as you DON'T nurse the feeling and won't do something about it. DON'T CROSS the borderline between cheating and faithfulness. recognize the reality that you already have the person that can give you MORE than what you get from the CHEAP THRILLS of attraction."

Recently, as I was scanning the boob tube, this late night travel show caught my attention, featuring the Santa Claus Village. 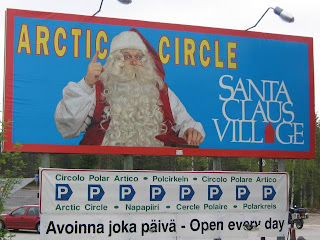 It's Christmas every day of the year in the rather commercialised (but quaint) "Santa's secret hideaway" in Lapland, northern Finland, where the redoubtable Mr. Claus spends his time preparing gifts for the world's children, and meeting and greeting an estimated 500,000 delighted visitors a year. 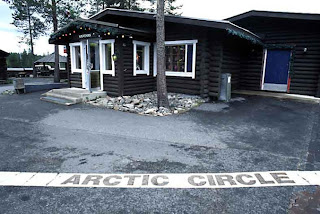 Co-incidentally the valley inside the Arctic Circle where Santa's Village is set is shaped like an ear, so, it is said, Santa can listen to all the children of the world. At the village all sorts of activities are on offer at Santa's office, the reindeer park and the SantaPark theme park, and of course you can use Santa's personal post office to mail a letter or card home with the coveted postmark. The highlight of any visit, though, is of course meeting the great man himself, and whispering your wishes into his friendly ear.

Merry Christmas to all!

What if I don't wanna move on
If I like it as it is
Wanna keep it like this, for a while...forever
Just let me lie close to you
Don't wanna let you go.

What if I don't wanna forget
Don't want anyone but you
Believe me, it's true, for a while...forever
Just let me stay here with you
I don't wanna leave.

recently watched take the lead. i was hesitant for the longest time. (again?) it seems that i dont have a knack for good movies, or its just i had a bad taste for its poster. well, i watched it so i can adapt the dancesport theme on our xmas party (naks!)

the movie started with these bunch of high school teens, spending their time at the detention. Pierre Dulaine just wanted to put their lives back on track, thru ballroom dancing. i was surprised, its not just dance, as what Dulaine explained, dancing teaches us a lot of values.

well, im a just love movies that inflicts values. AnakTV seal, that is!

anamorphosis: a distorted projection or drawing that appears normal when viewed from a particular point or with a suitable mirror or lens.

World Aids Day has passed.
I missed Youtube. It's been a while since I watched videos.
Here are some banned commercials for your sheer enjoyment.

passing up on love

right now, i'm suppressing the feeling, or just letting it passed by.

someone said about taking chances. i have to evaluate myself, love should not be a necessity..

ive been into the best and worst of this mad love

Categories: some matters do matter, tidbits

This is the second time I’ve been to Baguio. the first one was a field trip, where every movement was strictly followed as planned. But this time, I’ve decided to go with my officemates, but with a little forewarning: the cyberpunk will roam the city on her own. And being a loyal buddy that I am, I don’t wanna fetch the cyberpunk on a police station just because she got lost. (hehehe!)

Moving along. We got a 7pm ride out of Manila, so plus 6 hours, that would be a 1am ETA.

We lodged at a pre-arranged boarding house, where we completed our sleep, getting ready for the day ahead. Upon waking up, first things first. We got a map for the adventure ahead. Now we’re all geared up!

First stop was the Lourdes Grotto. It is the nearest landmark at our place. The group planned a fun-race, the first stop was at the top of the grotto. There, we all need to catch our breath, so they decided that race was to be shelved.

Then we got our escape act. We went straight to Session Road, to try Café Volante for lunch. It is located right in front the stairway leading to the Baguio Cathedral.

12:30 Café Volante
We ordered a marengo pizza, putanesca and bolognese. As I compared the sizes of the pizzas, I took the 10” pizza, considering that it fits our budget. (So what if there were leftovers, we can take them out as we normally do!) So everything’s has been served, then a fly suddenly roamed around my pasta. Good thing, they offered to replace it. I suggest that they should start disinfecting the place. But as I learned that it is open 24 hours, cleaning would be tough task.


14:00 SM Baguio
It started raining just when we are strolling Session Road. At the end of the street we saw SM Baguio within walking distance, and since the rain is still pouring, we decided to kill some time at the mall. Inside, I was amazed at the roof; it looked like one big tent that covered the whole building. It also has a veranda, for landscape viewing of course! I noticed that it still has AC blowing at the department store. It has been a complete reversal over there, in the sense that, if you go inside a mall, you chill yourself. Unlike here that you feel warm when you are inside.


17:00 City Market
At long last, rain finally stopped! (three precious travel hours wasted!) it was getting dark, so decided to take a walk (again!) down to the market to buy some pasalubong.

Then we got tired walking all day, and its time to head back home and rest for a while.

22:00 Burnham Park
The park was peaceful at night, the boats at rest, the breeze so cold. (limited for this season, try to visit here by February)

Then went to Nevada Square to see some nightlife.


10:00
The following day started with a trip at Tam-awan Village. As we eavesdrop on someone else’s guide, I’ve learned about the fertility hut, where childless couples, together with a priest, do some rituals to be fertile. Interestingly, if the act did not materialize, both the couples have the right to find out who’s sterile. (Hmmm! Unfaithful! Haha!) We got a challenge to cross the bamboo bridge there. It was slippery then. 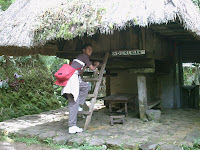 Next stop is the Bell Church. It is located at the border between Baguio city and La Trinidad, Benguet. We explore the place, and saw the pagoda at the top (more and more stairs!) Then we went inside the temple let our fortunes be told. (Chinese style! incense...) 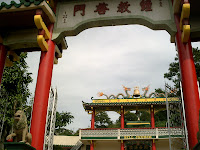 Next, we went to La Trinidad, to see the strawberry farm and the provincial Capitol. (just a glimpse, since we are hurrying to go back to the city)

15:00 KFC. Baguio Central Mall
We were starving. Good thing the crew is generous enough to give us all the gravy we want. Customer satisfaction guaranteed. (Notable, because branches in Manila are too tight on giving condiments)

Wagwagan, Abanao Street
We missed the sidewalk ukay-ukay at Session corner Calderon the night before, so we went to the next option. Cheap finds. From designer bags, to jackets, and to dresses, no wonder it’s still an attraction here. We found some collectible toys/squeezables, like doraemon and ernie of sesame street.

19:30 Barrio Fiesta
Went to see the sculptures over there. It looks real from afar. Especially, the guard reading the newspaper. Then there’s Cory Aquino, Cardinal Sin, Ninoy Aquino, FVR, and Gloria Arroyo.

20:00 Fireworks Display. SM Baguio
We went back to SM Baguio for their fireworks display. As we looked for a restaurant to dine, the guard suddenly stopped us from going to one of its section. As we waited on the main veranda, awkward ideas popped into my head. “What if the fireworks showed up on the veranda on the other side?” After a few minutes, that wild feeling became a reality. And guess where the fireworks took place? Right on the spot where we weren’t allowed to pass through earlier. Tsk! Tsk! Tsk! Then off we go to the terminal headed for Manila. 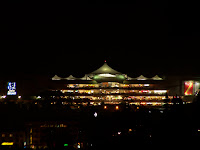 Noticed anything? We missed a lot of attractions on our trip. That’s why we’re ecstatic on our next trip, as early as we land back to Manila. 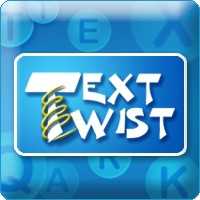